Networking – What it means and possible configurations in VMWare Workstation

At some point, you would like your shining new Virtual Machine (VM) to access the Internet or communicate with other devices (computers, printers), be it VMs on same host or external computers. To configure this networking, you need to understand the fundamentals of computer networks and the components of VMWare virtual networks.

We all have internet at home these days and connected our PC, laptop or our smart phone to our broadband modem. So what’s a modem, is it a Switch or a Router or both?

Difference between a Switch and Router: Remember a Switch creates a network whereas Router connects one network to another.

Now that you know what a network adapter, a switch or router is, we can move onto how networking works in VMWare.

When you install VMware Workstation, many networking components are configured on your host computer.

Virtual switches are created as needed by the VMware Workstation software, up to a total of nine switches. By default three switches are configured for three different types of networks – Bridged on switch VMNet0, Host-only on Switch VMnet1 and NAT on VMnet8.

A virtual network is formed when network adapters of your host computer and VM connect to a virtual switch.

Following are the list of resources I used and would highly recommend to anyone new to computer networking or VMWare.

Popular posts from this blog

I was configuring a new SharePoint 2013 Search Service when everything became stuck on service toplogy activation. It doesn’t matter whether I tried to configure Search using PowerShell or Central Administration the search service topology simply won’t activate. Search service & all its associated databases were created successfully but when I tried to activate a new search topology, created by cloning an existing topology, commands will fail. My SharePoint 2013 environment I was configuring a new Search Service Application on Windows Server 2012 Standard, SQL Server 2012 and SharePoint Server 2013 SP1. It was a single server SharePoint environment with SQL installed elsewhere. Servers have been joined to corporate domain & have Windows security features like Firewall etc activated. Error messages in ULS logs ULS logs were filling up with following error messages: “Content Plugin can not be initialized - list of CSS addresses is not set.” (Note: This error starts
Read more 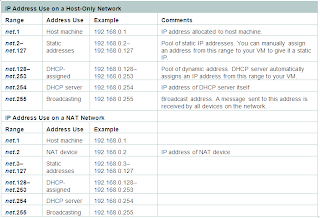 A virtual DHCP server, included with the installation of VMWare Workstation, assigns IP addresses in Host-Only and NAT network configurations. DHCP follows certain conventions when allocating IP address and sets aside a pool of addresses that it doesn’t assign. An IP address from this static pool can thus be assigned manually to a virtual machine, giving the VM a static IP address. Why static IP? Static IP address is a must have requirement if you are planning to setup an Active Directory domain. Server acting as domain controller must have static IP so that VMs, joined to the domain, can connect to the domain controller all the time. If the domain controller is set to get a dynamic address from DHCP then its IP address will change. This change in address doesn’t propagate to VMs joined to the domain, resulting in domain connection failure. DHCP IP address pool Following table outlines the conventions used by VMWare DHCP when allocating an IP address. The net value is the netwo
Read more

November 12, 2013
If you are planning to migrate from SharePoint 2007 to 2010 or to 2013, then first thing you should do is to audit your content to determine what’s being used & thus should be migrated. I wrote the below script to determine the site collections modified recently & their site owners. I started with “LastModifiedDate” property of SPWeb object but quickly realised that search crawler updates this property every time a crawl takes place. Thus the solution is to go through each list within the site collection & get the most recent modified date. This gives us more accurate figure we can present to business owners. [System.Reflection.Assembly]::LoadWithPartialName("Microsoft.SharePoint") [System.Reflection.Assembly]::LoadWithPartialName("Microsoft.SharePoint.Publishing") # Get the last updated date for a site collection # Iterate through all webs & all lists of the site collection and returns the most recent updated date function getLastestChangeDa
Read more